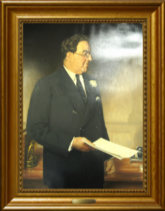 William Thomas Morris was born in West Pittston, Pennsylvania on July 20, 1884. He was the son of Thomas J. and Jane (Reese) Morris, and was one of nine children born from that union. His father, Thomas J. Morris, who was regarded as a very religious man and a great student of the Bible, was born in 1839 in Wales and emigrated from that country to the United States in 1864, where he first settled in Scranton, Pennsylvania.

His entire lifetime was spent in the coal business. His mother, Jane Reese Morris, was born in Eckley, Pennsylvania on June 4, 1849, and married Thomas J. Morris in Scranton on June 16, 1866.

In 1899, despite the objections of his parents, William Thomas Morris at the age of fifteen opened up a restaurant in West Pittston in partnership with his brother, which venture proved unsuccessful. Mr. Morris spent the next four years doing various jobs such as coal mining, clerk in hotel, oil business, etc.

In addition to the American Chain & Cable Company, Inc., Mr. Morris was an officer and director of the following companies, and was actively engaged in the management of said companies:

Since Mr. Morris possessed an exceedingly charitable nature and was imbued with high humanitarian principles, he felt that he wanted to share with his less fortunate fellowmen some of the fruits of his outstanding success in the industrial world. After a great deal of deliberation, he decided in 1937 to form The William T. Morris Foundation, Inc. to carry on religious, charitable, scientific, literary and educational activities.

In 1941, at the outbreak of the war between the United States and the Axis, Mr. Morris decided he wished to become interested in an industry directly connected with the war's effort. From a patriotic standpoint, he wished to contribute materially to further the interests of our country and its Allies. He, thereupon, became interested in the Annapolis Yacht Yard, Inc., Annapolis, Maryland, which company received contracts to build fifty Vosper PT or Mosquito Boats for the English Navy and also the Russian Navy under the Lease-Lend program. The great majority of these boats are believed to have seen combat duty. Besides constructing these vessels, the company was the design agent and acted as the agent of the United States Government in its program to fabricate these boats in three other Yards in this country. This entailed buying of the spare parts for this program and supervising the procurement of the Government-furnished material. In addition, this company built and delivered twelve Submarine Chasers to the United States Navy.

The success of Annapolis Yacht Yard, Inc., in building and delivering in the shortest time possible, vessels for use by our Allies and our own Navy, can attributed primarily to Mr. Morris' executive genius and financial assistance. He devoted much of his time (approximately two days a week) to the company for a period of over three years, this without any personal remuneration or thought of benefit of himself. His only object was to assist his country and its Allies in bringing the conflict to a successful conclusion.

Since his untimely death in February 1946, The Foundation has expanded considerably, but still carries out the basic charitable concepts established by Mr. Morris.
The Foundation no longer has any connection with American Chain & Cable, Inc. or its successors.